I just realized it’s been two weeks without a post.   Last weekend we took H and two of her friends to Florida to my in-law’s for Labor Day weekend.   It’s actually a repeat of last year, when H decided she’d rather do this than have a big party.  She had so much fun she decided to do it again.  Makes it much easier on the parental units.  All we have to do is cough up the money for plane tickets and a couple of dinners.  They pretty much entertain themselves.  Well, it doesn’t hurt that Grandma and Papa live in a community with golf, tennis, swimming, beach club, and most important (when you’re 14 and 15) GOLF CARTS.  Combine two golf carts with three teenagers and a closed golf course, and it’s like their own private amusement park.  The only thing missing…boys.  At least in this community, there were no boys under retirement age, so it was very relaxing for J and I.  Something tells me when these girls start driving real cars and want more social interaction, this trip might not hold as much interest for them.  But for now, we enjoyed the weekend. 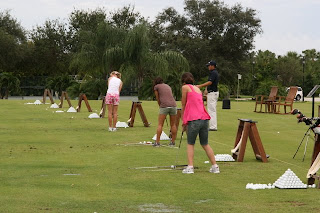 Since I don’t have permission to post the beautiful faces of these girls, here’s a non-identifying photo of them taking a golf lesson.

And here’s the image I see in my head when I look at H’s face: 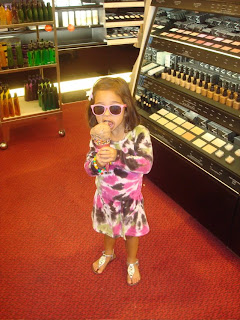