H’s recent gum surgery was the beginning of the final solution to problems she’s had with her front teeth since before she was two. She fell on the playground a month before her second birthday and knocked out the pretty new tooth she had just sprouted in the front of her mouth. We actually found the tooth, which came out root and all, but her (our family) dentist didn’t feel that trying to reattach it would be helpful, since it was just a baby tooth. I was heartbroken. She cried for five minutes and promptly forgot about it. She spent the next five years without a front tooth. At first, people just thought she hadn’t gotten the tooth at all yet, then they thought she had lost it early. At any rate, other than lots of pictures of her without a tooth, it didn’t really matter to her one way or the other. 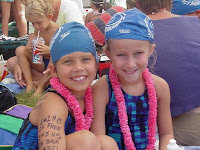 In first grade, the permanent tooth grew in, finally. I personally think there was something wrong with the root, because it came in crooked. Then, a couple of months into the school year, I got a phone call from the school nurse. She had fallen on the playground, and knocked it out. This time, we couldn’t find the tooth. Her schoolmates still remember the mass search party on the playground, to no avail. So once again, she was toothless. The first prosthetic tooth she got was really bad, but we were so glad to have something there that we lived with it. It wasn’t crooked, and we knew it was temporary, so it was o.k. 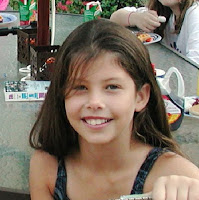 Over the next 7 1/2 years we went through different variations on the tooth: one attached to her braces, one attached to metal bands, and another with little wings on the back that were glued to her existing teeth. She had another problem, though, which was a genetic problem that she shared with J. Her teeth were stained kind of yellowish-brown. No amount of brushing could get rid of it, so we did some composite bonding, which never really matched the fake tooth. Luckily, she is a beautiful girl, with a beautiful smile, so even though her teeth weren’t ideal, her smile made up for it.

Through all the variations of temporary fixes, our family dentist did the work. He’s a really nice guy, and does regular cleanings and things for us, and fits us in when we need emergency care (like gluing her tooth in every time it fell out). We really like him for our regular dental care, but we always thought we’d go see a specialist when it was time to do something more permanent. He does some cosmetic stuff, and his website lists his education, but he doesn’t really have any aesthetic certifications or degrees. The thing is, J and I were big wimps about telling him. Last year, H started expressing an interest in getting her teeth fixed, so we asked around and got several recommendations for a cosmetic dentist here in town, Dr. Dennis Wells. Dr. Wells does a lot of celebrities, even did the “Extreme Makeover” show and has all kinds of aesthetic experience, certifications, and degrees. We really feel comfortable with him, and consulted with him and a periodontal surgeon here to establlish a plan for H’s teeth. But through all that we never told our family dentist. J had a cleaning a couple of months ago, and I told him to mention it, but he said it never came up, so he didn’t do it.

Yesterday I had my regular appt., and since H has started the process, of course, I had to tell him. I hated telling him, because he’s been so nice about working with us over the years, but I really thought he’d understand. He’s not a cosmetic specialist…and H’s problems are not even close to being typical, or easy. But he was really upset. He looked at me like I had just stolen his pension or something. I started stuttering, like I always do when I’m nervous, and said,

“It has nothing to do with YOU…You’re great! We just thought we needed to go to a specialist.”

He said, “Well, it sure seems like it has EVERYTHING to do with me.”

I felt like I was a teenager breaking up with a boyfriend…”It’s not YOU, it’s ME!”
Anyway, after I tried to justify our position, and he scolded me for quite a while, he said, “Well, you have to do what you have to do.” Then he stood up and walked out of the room, saying “Bye” over his shoulder as he walked down the hall.

Something tells me he won’t be fitting us in for apppointments in the future. Jeez.

0 thoughts on “Am I Cheating on my Dentist?”