Last month while we were planning our trip to Colorado, I was browsing through the Aspen Times  and found a little reference to a half marathon happening a week after we arrived.  The fact that it was going to be run at 9,000 feet didn’t quite register with me, because I saw the elevation map…

This is the whole marathon map, but the half starts at around mile 7 and veers off from the full marathon at around mile 17.  So my brain saw downhill and I signed up!  The fact that I had six days to acclimate to the altitude as well as the fact that I did not train for it didn’t cross my mind.

I started getting a little bit nervous four days ago, when we biked the course, and the “downhill” portion wasn’t as easy as I imagined.  The altitude was still doing a number on me.  Then I checked the results from last year’s half, and the slowest person was around 2 1/2 hours…yikes!  That’s about what I ran the Country Music Half in April.  Combined with the altitude and the lack of training, I convinced myself I was going to be in last place.  I know, I should be happy that I can run at all after my heart issues last year, blah, blah, blah…but last place?

I fought off the urge to can it entirely, and decided to just show up and do what I could do.  If I had to walk part of the way, hopefully I’d finish before at least one full marathoner, since they only started one hour before we did.  I drove to the intercept lot where the bus was there to take us to the start.  A quick look around didn’t make me feel very good.  No old people (like me), and no fat people.  Seriously, I have run 9 marathons, and it is amazing the amount of overweight runners who run faster than I do!  I used the portapotty 4 times (yes, nervous much?), and eavesdropped on other people’s conversations.

I heard someone talk about a seven minute mile pace being slow, and the chick behind me was talking about doing a 500 mile Rocky Mountain bike ride.  Not good.  While on the bus I talked with the guy in front of me who has done this for three years, and he told me that 1) they took out the big uphill at the beginning (what?  I didn’t know there was an uphill at the beginning!), and 2) there were about 300 half marathon runners, which was more than double the number from last year.  That eased my mind a little.  Surely there would be someone else as dumb as me who signed up without training or acclimating to the altitude.   Then I saw this guy…he’s probably a really nice guy, but I thought, “Maybe I can beat him!”

The course really is downhill, even if it doesn’t feel like it most of the time.  It’s one of those deceptive downhills that seem flat, until you turn around and go the other way.  It was painful.  My pace was faster than I planned, which made me nervous for the end of the race.  But the views were amazing.  Around mile 7 my stomach started rumbling a little bit, the way it does when I usually duck behind a tree or find a gas station with a bathroom.  Unfortunately,  there were no trees to duck behind, and definitely no gas stations.  I was afraid to drink water at the water stops because I didn’t know what my stomach would do, but I made myself do it, because it is definitely dry here.  Then, after a rare uphill at mile 9, there was a water stop, and Glory Hallelujah…

That 5 minute stop did wonders for me…gave my legs a rest, too!  The next 4 miles were hillier than the entire course, but I made it!  And the second I crossed the finish line, my phone rang and it was H!  She had no idea I was running but it was the best prize I could have gotten.  I know, it really shouldn’t matter if I finish last, it should matter that I finish.  And I get that.  But for some reason, the thing that keeps me signing up for these things, even though I get older and slower, is that I’m not the only one.  I’ll never win a race, but hopefully I’ll always beat someone, even if it’s a 92 year old.  I think that’s a reasonable goal…until I’m 92. 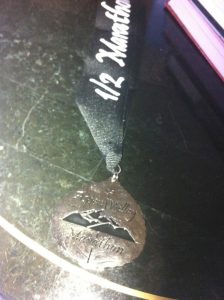