I’m still here!!!  Whew.  The last 3-4 months have been a blur.  I won’t bore you with details, but in short, H is now a high school graduate!  The last few months of school for her were a combination of frantic studying, finding out which colleges she was accepted to, deciding where to go (which involved a few repeat trips on both sides of the country), planning an Operation Smile fundraising concert without much help, and graduation.  Combine all that with the inevitable “senior slide” and it made for a pretty tense situation in our household.   All I can say now is that I feel like I have my sweet daughter back.  When she took her last AP exam a week before school was out, it was like a fresh breeze was flowing through our house.  She exempted out of all her final exams so the stress of picking out a college and maintaining her grades was gone.  I can’t tell you the feeling of relief we all felt.

J has been dreaming and planning for the day after H’s graduation for the last four years!  I still can’t believe we’re actually living the dream.  We’re not quite ready for the whole shebang, which is making North Carolina our home base and downsizing in Nashville, but we’re able to spend a lot more time in NC.  We finally moved into our new house.  J likes to say it’s the home he’s going to die in, but hopefully not for a very long time!  H was in a little town about half an hour down the mountain where she was doing lifeguard training and orientation for being a camp counselor at Keystone Camp where she spent many summers as a little girl.  She had not seen the new house in quite a long time.  She called up one night because they had the night off and wondered if she could bring a few friends up for dinner.  Of course, I was thrilled.   I didn’t think I’d get to see her at all for a couple of weeks.   She used to love Lake Toxaway.  But in the last few years, being an only child in a retirement community with lots of old people and no teenagers is not fun.  She didn’t have a lot of expectations for the house because she didn’t think she’d have much use for it since she’s going off to college in California.  But when she came in with her friends, she was so excited, which in turn, made us ecstatic!  She even says that she would come here when she’s got a break from college!

After her orientation she had about three weeks to spend with us.  She had one friend from Nashville come up for a couple of weeks and it was so great to have that time with her, and see her relaxed and happy.  She had 9 Adventure Treks friends (the backpacking, climbing, camping trips she experienced the last two summers) come to the house for a long weekend “reunion”.  I was a little nervous about cooking for 5 boys, much less 10 kids, but it worked out great.  The kids were great, the food was consumed and they even cleaned up before they left.  Great memories!

But by far the best part of my summer so far was a week of just the three of us.  H even wanted to spend time with us, which was a rarity a few months ago.  In less than two months she will leave the nest for a new college life in California, so I am treasuring these moments.  She never looked at a single college in the vicinity of Tennessee or North Carolina, so I am used to the idea of her leaving, but I think when we actually drive away after orientation I will be a basket case.  In the meantime, I am enjoying every moment I can get.

Here’s a recipe for the breakfast pizza I made one morning.  It’s easy, pretty, and healthy, and I used to make it whenever Halle had friends over.  Her AT friends inhaled it before they made scrambled eggs and bacon (and cleaned up after themselves…a miracle!) 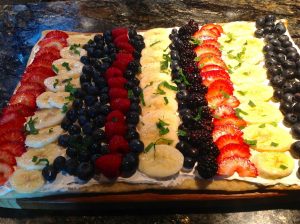 One roll of refrigerated pizza dough
Lowfat cream cheese
Lite Cool Whip
Assorted fruit (Berries, Bananas, Kiwi all work great, but use your imagination)
Cinnamon Sugar (I make my own so I can adjust the amounts of cinnamon and sugar)

Roll out the dough onto an ungreased nonstick baking pan.  Sprinkle with Cinnamon Sugar.  Bake at recommended temperature until very lightly browned (don’t let it get too done or the pizza will be too tough and hard to cut).  Slide out of baking pan onto cutting board to cool.

Mix about 1-1 1/2 cups of Cool Whip with a half cup of cream cheese until spreadable.  Spread onto cooled pizza crust to the edges.  Slice fruit as desired and layer over cream cheese mixture.  Sprinkle with Cinnamon Sugar.  I usually slice it into squares for serving.