The summer I was six years old, my mom had abdominal surgery.  I was shipped off to stay with my grandparents at their farm in McMinnville, TN.  I remember several things about that summer, like fishing in the brook, and when Grandma taught me how to make homemade rag dolls.  We cut the basic shape out of scrap material, turned it inside out and hand stitched almost all the way around, except for one of the feet.  Then we stuffed them with small scraps of material and used the strings from the recently shucked corn from her garden to make hair.  Sewed on buttons for eyes, yarn for mouth, and voila!  A toy!  It was the coolest thing I had ever seen.

I also remember  going to the garden and apple orchard to harvest whatever vegetables were ready…tomatoes, corn, green beans, apples, okra, strawberries and squash are the ones I remember.  I also remember that I only ate some of those vegetables at Grandma’s house.  For some reason,   they tasted so much better there than at home. 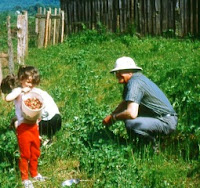 They had lots of animals…cows (to be milked), kittens (to catch mice), and chickens (for eggs).  At least, that’s what I thought the chickens were for.  I loved gathering the eggs, and feeding them.  I had names for them all…Chuckie, Suzy, Betsy…and would call them by name as we threw the chicken feed all around their feet.  WARNING:  The next few sentences are not for the squeamish. One morning, Papa asked me if I wanted fried chicken for dinner.  “Sure!” I replied.  Never in a million years did I think he was talking about my little friends.  To me, chicken that you ate was the white slimy stuff my mom bought at the grocery store.  While I was busy feeding them,  Papa walked over to Betsy, the biggest, fluffiest chicken of them all.  He grabbed her by the neck, whispered, “Thank you, my friend,”  and before I knew what was happening, had slung her around in a neat little jerk, and popped off her head!  Her body fell to the ground and her legs kept going, like she was trying to run away from what had happened.  I don’t remember much after that…mostly screaming and crying and not understanding at all.  I think he tried to explain the circle of life to me, but I wasn’t having any of it.  It was a long time before I ate chicken again.

But I did…I ate chicken, steak, pork, bacon, and my favorite…Rudy’s Farm Sausage!  As I got older and became more health-conscious,  I ate less and less of it.  It became a treat, not a normal thing.  But for my parents, and their siblings, and countless others who grew up on farms and when meat was considered a luxury, the last few years of mass-produced, affordable animal products, have resulted in diets that centered around the meat.  I love to cook, and when I cook for family and friends, I never thought I could serve them anything without meat.  It wasn’t a meal, otherwise!  I understood that animals like chickens couldn’t live in the wild for very long, that they had comfortable, loving homes on a farm where they had plentiful food and places to run around in the sunshine.

Then I saw the movie, “Food, Inc.”  Actually, I watched most of it with my hands over my face in horror.  It showed that a handful of corporations control our nation’s food supply. Though the companies try to maintain the myth that our food still comes from farms with red barns and white picket fences, our food is actually raised on massive “factory farms” and processed in mega industrial plants. The animals grow fatter faster and are designed to fit the machines that slaughter them. The majority of mass-produced chickens are raised in the dark, their breasts becoming so  large that they’re unable to walk. But that’s okay, because they’re not allowed to. The antibiotics they are fed to keep them breathing in such conditions end up right there in every bite of your sandwich.  Even “organic”, grass-fed cows are slaughtered at the same slaughtering facilities as the ones raised in dark barns, eating a diet of corn that fattens them up but becomes breeding grounds for E-coli.  Those slaughtering plants stun the cows, hang them upside down by one leg, and slice open an artery so they quickly bleed to death.  Although the numbers are improving, there is a percentage of cows who are not completely stunned, and are slaughtered while awake.   Tomatoes are bred to be shipped without bruising and to stay edible for months. The system is highly productive, and Americans are spending less on food than ever before.  In the process, the food doesn’t taste like food anymore.  The tomatoes I buy at the grocery store bear no more resemblance to the tomatoes I ate on Grandma’s farm than an orange and an apple.

“Food, Inc.” is not trying to push vegetarianism.  It is just raising awareness about where our food comes from.  That a small handful of corporations are controlling not only our meat supply, but the seeds use to grow our crops.  They are methodically pushing the small independent farmers who are capable of producing food in a humane way that will safely feed us out of business.  Meat plants are “washing” beef with ammonia and chlorine to guard against E-Coli, even though just five days of feeding a cow grass could safely eliminate the risk.  Americans expect their meat to be cheap and plentiful, so there no easy solution.

My family is no longer eating meat.   Not that we have an objection to animals being eaten, but because we don’t see an easy answer to how we get it to our table.  When I entertain a group of people who I know don’t consider it a meal unless meat is served, I try to seek out grass-fed, locally produced meat.  There is a growing group of “conscientious carnivores” and a growing number of  farmers who are raising animals for meat and dairy in a humane way and offering concerned consumers a choice about what they eat.  The choices in my area are small…basically it’s Whole Foods, or sometimes I find small farmers at the farmer’s market.  Here’s a great website to find humane sources of food in your area.  http://www.certifiedhumane.org

The upside is that more and more people are thinking twice about what they eat, and where it comes from.  The downside is it’s more expensive.  But  I think this is a win/win alternative: Eat less. Who needs a 24 ounce steak?