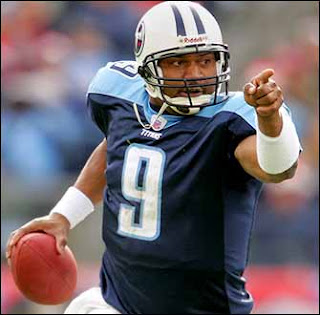 We’re finishing up our third week at our little mountain house. Even being in this remote little community, bad news finds us. As if the loss of 70’s pop culture icons Farrah Fawcett and Michael Jackson wasn’t enough, I sat down to catch up on facebook and got the heartbreaking news that Steve McNair had been shot and killed.

I physically felt a burning in my heart, because Steve was such a hero to my hometown. Both on and off the field, he was a leader, a mentor, and a philanthropist. But perhaps more than the tragic loss of a home town hero, is the disappointment surrounding the details of his death. The facts are slowly being presented, but instead of focusing on his personal life, I want to remember him as a class act, both on and off the field.

Back in 2000, the year after McNair led the Titans to their first super bowl, which we were fortunate to be able to attend, H was 7 years old. She was participating that season as a “Jr. Titans Cheerleader”, and was a huge fan of McNair. We were eating at a local restaurant, and I noticed that he was eating at the bar. H wanted to go talk to him. At first, both J and I didn’t want to bother him, but we eventually relented, cautioning H that he might not want to talk. She walked up to him and tapped him on the leg. He turned around, and seeing her, got down off his seat, and then down on one knee so he could talk to her at her level! She told him he was her favorite player and that she was a Jr. Titans Cheerleader. He told her he was very impressed, and thanked her for her support. She was smiling ear to ear when she came back to our table. Her first experience with a ‘celebrity’ could have been a disappointing one, but Steve McNair was a gentleman and we will always remember that, not the sad details that may emerge surrounding his death.

Farrah Fawcett was the ultimate poster girl. I wanted the red bathing suit and I wanted my hair to look like hers. I bought my first set of hot rollers, and asked my hairstylist to cut my hair in “feathers”, just like hers! On me, the hairstyle looked more like an afro, but it was something that I (and all my friends) strived for. 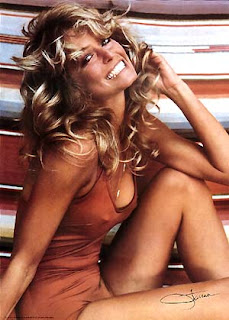 I have so many memories of Michael Jackson…all the way back to “A,B,C”, the “Thriller” debut on MTV, seeing him perform the moonwalk the first time, running around the UT campus with “Billie Jean” on my cassette walkman, and the sad photographic evidence of his morphing into an unrecognizable character as symptoms of a man with obvious issues surrounding his identity. When you see side by side photos of him as a child next to him as an adult, it’s even more shocking. 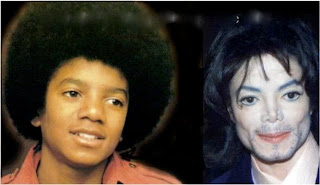 But regardless of whatever inner turmoil Michael had, he left a legacy. Hearing the multitude of voices singing, “We are the world” still fills me with hope…and even though the purpose of the song was to raise awareness and funds for famine in Ethiopia, it reflects an image of musicians banding together for social change, and the possibilities of that are inspiring.

If anything can be taken from the events of the last couple of weeks, it is that life is precious, and uncertain. Three lives were taken from this world too soon, but their contributions and influence will last forever.