I’ve been in rehab, for my facebook addiction. See, this is the problem. I’ll be just doing my mom thing, running H all over the place, and waiting for her to come to the car, and my iphone is there, just waiting, with notifications of all kinds of things…responses to my posts, old friends trying to re-connect, pictures of my friends doing whatever they’re doing, old pictures of me that I have never seen before, status updates from H, telling me what she’s up to (because even living in the same house with a 15 year old does not guarantee that she actually talks to you about what she’s REALLY doing).

Or I’m at home, paying bills, and an email pops up with a notification. Or I see the “scramble” bookmark and think I have three minutes to do a quick round (which turns into half an hour at least…every time).

You know, just thinking about playing Scramble makes my fingers itch to click on it.

Seriously, facebook has eaten into my day more than any hobby I have ever had. It’s good to re-connect with old friends. I actually had lunch with my friend Julie from college last week. We’ve both been here, in the same city, for over 20 years and have NEVER run into each other. It was so great to see her beautiful face and catch up with her.

I also got a message from a girl whose name I didn’t recognize (at first), asking if I had worked at Opryland in the 70’s, which I had. Apparently we worked together, she remembered me, and even had a photo of us from the Opryland YEARBOOK! Who knew there was such a thing as an Opryland yearbook??? 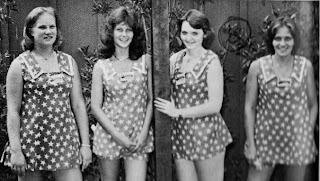 I guess there was. Five points if you can recognize me in this photo.

Speaking of five, there are Five Clues you’re addicted to facebook, according to CNN:

2. You spend more than an hour a day on Facebook

3. You become obsessed with old loves

5. The thought of getting off Facebook leaves you in a cold sweat

Anyway, I don’t know how many steps you need for a facebook addiction, but when you can’t get through a conversation without pulling out your iphone to show someone a picture, you’re deep in it. I haven’t reconnected with any old boyfriends, or neglected my family, but I have definitely wasted a ton of time.