I remember the first time a boy asked me to “go with him”. We were in 8th grade, and I met him at Hermitage Landing…way back in the day. Before they had a swimming pool…it was just a beach at the lake. He went to school in Mt. Juliet, and I went to school in Donelson, so we had a hot summer romance, until we went back to school. Since neither of us drove, or had any reason for our parents to drive the 15 or so miles between us, we had to rely on telephone conversations. In eight grade, I rocked at telephone conversations. We talked for hours. It was kind of romantic, my “long-distance” boyfriend, that no one ever got to meet, so they probably thought I made him up. I’ve been trying to remember how we broke up…because I’m sure there were tears or some kind of heartbreak, but…nothing. I think that’s a good thing. Because as upset as I’m sure I was when that relationship ended, I’m not scarred for life.

I’ve been thinking about that, because H is now “in a relationship”. (According to facebook). He goes to the all boy’s school down the road, so she only sees him at mixers and group outings. She asked him to Winter Formal, which was this weekend, so the official “asking her out” happened that night. (I know it’s official, because it’s posted on facebook. One of them has to request to add the “relationship” tag, and the other has to accept before it’s posted) It’s like “going together” was when I was this age, now it’s “going out”…although they don’t go anywhere.

I was thinking about my 8th grade boyfriend, because it’s a similar situation. He’s at a different school, they don’t drive, so they can’t see each other very often, and they have long conversations on their cell phones. The only difference is, the conversations are all text messaging. She’s very happy, and excited, and of course, I’m happy for her, but all I can think about is what happens when it’s over. He seems like a really sweet boy, and I’m sure he won’t do anything purposely to hurt her, but that is another right of passage that I’m not looking forward to. The consolation is that I know I survived it, so I’m sure she will, too. 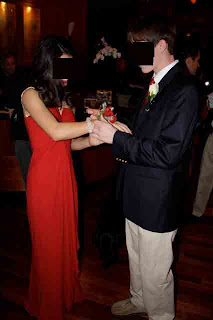